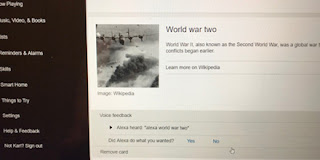 As a busy, task-oriented person with a penchant for low-tech time-management strategies, I decided to give the Echo Dot a try. It may be technical, but I thought if I didn’t have a large learning curve, it might be a convenient add-on to help manage my busy life. After a couple of years, what are the results?

First, I’ll explain what the Echo Dot and Alexa are for those of you who are unfamiliar with them. The Echo Dot is a small, technological device available only from Amazon. The software it runs is Alexa, an artificial intelligence personal assistant. It requires an internet connection to function, and it can, in turn, be connected to “smart” devices in the home and operate these other devices. There are hundreds of tasks (maybe more by now) that Alexa can perform by voice command. Alexa also runs on other Echo devices and is now even available on a television.
I remember when I first received the Dot. My husband and I were kind of excited to get it set up and start to see what we could do with it. The set up was quick and easy, which is saying something since I don’t typically find technology always quick and easy. It’s not terribly hard for me, but it does take a few extra brain cells.
For days, we played with asking Alexa all kinds of questions. We were delighted at some responses and disappointed with others. We tried to have conversations with her because we fell into the trap of thinking of her as a “her.” But when you have to say “Alexa…” before every single sentence and question, it doesn’t come off as a remotely natural conversation.
Every few days (I think. I haven’t counted.), I get an email from Amazon with new great things Alexa can do. At first, I read the emails with interest to see if there was anything that would be useful to me. But mostly, it was just games, jokes, trivia, how to make cocktails (oh, wait, that’s useful), and stuff like that. After a while, the emails started to feel like a lot of the other clutter in my inbox, and I started sticking them in a folder for a later look “when I have time.” I never have time, so I finally started just deleting them without looking at them.
So, what do I use Alexa for? About 99% of our requests are for the weather, to set a timer, or to add an item to our shopping list. We have on occasion also asked Alexa to play music (classic rock for me, baroque for the dogs), reorder an item from Amazon, or answer basic questions. She gave me a great recipe for guacamole. Worth the $50? Probably not, but at least we do use it daily, and it saves maybe a few seconds of time each time we use it.
Probably the best feature has been the shopping list. When I’m at the store, I can use the corresponding phone app to view the complete shopping list that my husband and I verbalized to Alexa at home. I can even ask my husband to tell Alexa to add something while I’m on my way to the store so that I will see it on the list.
There are undoubtedly features of Alexa that I am unaware of that would be desirable and useful. Maybe I need to start sparing a minute to look at those emails.
What I don’t like about Alexa is the timer. For one thing, it’s useless for anything under two minutes. After asking her to set a timer for however many minutes, there’s a pause, probably only a second, but it feels like forever, and then, she replies, “Okay, timer, two minutes, starting … Now.” No, there’s no pause after “starting,” but it almost feels like there is. So just starting a timer takes a few seconds. Then, once the timer goes off, we have a really hard time getting it to stop. Sometimes, we have to say “Alexa, STOP!” several times before she does.

Another issue with the Echo Dot is that it will only function as long as it’s connected to the internet. That’s sometimes a challenge in our rural location. Seriously, it can’t even run a timer unless the internet is working. This is why I never use Alexa for important reminders. I don’t trust that 1. she’ll remember the important reminder if the internet goes out between giving her the command and the time I need the reminder, and 2. what if the internet goes out during the time I need the reminder? So yeah, nothing important will I trust it with.
And then there’s the really weird stuff. My husband and I will be having a conversation, and suddenly Alexa will start talking. Or singing. Yes, singing. If I go and look at the Alexa phone app, which records everything Alexa hears and her responses, it says she hears us say “Alexa, sing,” for example. Obviously, something we said kinda sorta sounds like “Alexa sing,” but when she starts singing or responding to general conversation, it’s still pretty creepy. There was one time, we weren’t even in the room and she started talking. We’ve been so creeped out at times, that we’ve unplugged it. Kind of an AI time out. Go sit in the corner and think about what you’ve done, Alexa!

And then there’s the privacy issue. Alexa is always listening. Amazon says it only records a few seconds and then “deletes” what it hears. I could get all conspiracy theory on you and say maybe that’s not really true. Maybe Amazon is keeping data on everyone who has an Alexa device. But why would they do that? Um, to sell the information? To use the information to personalize their marketing to you EVEN MORE THAN THEY ALREADY DO? Or maybe the government has already tapped into the data stream and is spying on everyone, using its own AI in their giant data center in Utah to screen for terrorists, criminals, and conspiracy theorists who are getting too close to the truth. Or maybe all Alexa ever hears in most homes is the TV and the occasional, “Alexa, weather.”
Bottom line: We could certainly live without the Echo Dot and Alexa. For now. We don’t own any “smart” devices yet, but I guarantee that once we have a smart TV, we’ll be using Alexa to turn it on, change the channel, find shows, etc. What I really need more than Alexa, though, is a robot that can do all the cooking and cleaning. In all likelihood, by the time the maid robots are available, I’ll be needing one to change my adult diapers.
Do you have Alexa? What are your favorite features? What am I missing out on?