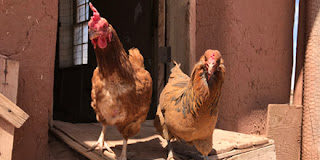 Of course, “the” egg came first, but that’s not really what we’re discussing is it?

We’re really asking, “Which came first, the chicken or the *chicken* egg,” right?

The whole conundrum revolves around whether it takes a chicken to lay a chicken egg… or whether a chicken egg can be laid by something other than a chicken.
So of course, the answer is… (drum roll, please)… the egg came first.
In order to BE a chicken egg, the egg has to carry a chicken embryo. Without the chicken embryo, the egg is something else. In order to grow into a chicken, the embryo has to BE a chicken embryo.
But a NOT chicken, can lay a chicken egg. That pre-chicken was carrying DNA that was mutating. The mutations were happening inside the pre-chicken, in its ovaries. And there were mutations occurring in the male pre-chicken as well.
Did the mutations happen in the egg? Nope. The combining of mutations happened inside the pre-chicken as the egg was fertilized, but the mutations were already extant.
We see wide variations in physical form with very limited difference in DNA. Some animals share over 99.9% of their DNA yet vary enough that they are visually distinct.
A pre-chicken may have resembled the present-day chicken so closely that we could not tell the difference. But it could have resembled something easily distinguished as not a chicken.
The chicken egg came first.
Now you know…
Click here to receive the Apocalypse Observer Newsletter in your inbox
www.readmota.com
To comment, scroll down and type in your comment. Under Comment As, you can select Anonymous or Name/URL (you don’t need to enter a URL). Then hit Publish.

4 thoughts on “Which Came First?”