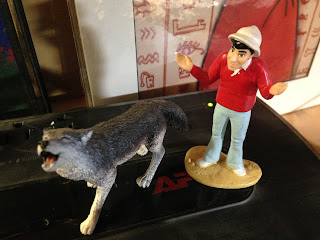 What will people of the future think of us? I mean the way distant future when they talk of us the way we talk of the ancient Egyptians. Will they dig up our smart phones and miles of fiber optics and Cuisinart coffee makers and then present papers at conferences on how we worshipped coffee and how primitive our communications were?
As an archaeologist (can I still say that since my survey permit expired two years ago?), I am conscious of the things we throw away and how someday our trash will be excavated and analyzed. And I’m a little embarrassed. We humans produce a lot of meaningless crap that someone will someday strain to ascribe meaning.
I have a figurine of Gilligan standing next to a figurine of a wolf standing on my desk at work. They have meaning to me personally, but if my building gets buried in a pile of rubble for 200 years and is later excavated by archaeologists, there is no way they will understand their meaning other than “toys.” At least I hope they won’t think I worshiped goofy sailors and animals. Oh wait, I guess I do.
I learned a powerful lesson about this long before I became an archaeologist. In fact it’s in part what lead me in that direction. I took an anthropology class in high school, and we were given an assignment – describe a human activity from the perspective of an alien. I don’t have the actual paper anymore, but I remember pretty clearly writing about the insanity of creatures strapping long strips of wood to their feet and repeatedly sliding downhill on frozen precipitation. It was so exciting to me to “observe” and “analyze” a behavior as if I had never seen it before and then try to figure out – Why?
Many years later, I worked in a state park with significant numbers of ancient rock art figures painted and inscribed on canyon walls. Visitors every day asked, “What do the symbols mean?” At first I did my best to educate them about the challenges surrounding assigning meaning to symbols created by people long gone. After years of blank stares and disappointment, I finally started saying, “Well, some people believe this means this, and others think it’s that….”
Today, one of my many hats is overseeing a retail operation that sells Navajo jewelry among other things. Most traditional Navajo jewelry is based in Spanish designs. They learned silver smithing from the Spanish and copied the designs they liked, so basically no deep, spiritual, Native American meaning there. But customers still want to know, “What does this symbol mean?” Sigh.
Oh, I admit I’m guilty, too. I’m 2-3 generations separated from the Millennials, so when I see a TV commercial that’s targeted to the younger crowd, I look at my husband, and say, “What did that mean?” He just shrugs and shakes his head.
To archaeologists of the future – if this blog post should be archived for study, know this, that we of the 21st century are strange, complex creatures. We sometimes do and create things just for the heck of it. To archaeologists of the present – let this be a lesson to you. Just because the material culture you study is finite, does not mean that the people you’re trying to understand aren’t as strange and complex as we are.
Sometimes there just isn’t a meaning.
Click here to receive the Apocalypse Observer Newsletter in your inbox
www.readmota.com
To comment, scroll down and type in your comment. Under Comment As, you can select Anonymous or Name/URL (you don’t need to enter a URL). Then hit Publish.