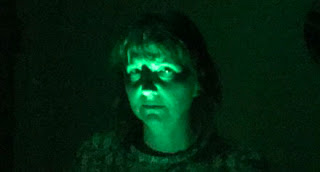 Happy Friday the 13th! Or should I say, ‘Watch out – it’s Friday the 13th!’?
History is rife with superstitions, and though we may think ourselves quite sophisticated today, we are still slaves to some irrational fears.
Superstitions make great fodder for horror movies, which is why, I think, we still tingle a bit in fear on this day. Still, the fourteenth floor of a building is really the thirteenth floor if the building does not have a thirteenth floor. Fridays and the number thirteen may get a bad rap, but they are really just a day and a number, nothing to get wrapped up about.
Generally speaking, a superstition is a belief or ritual based on an irrational fear or wish. Most of them we recognize as silly today, but all superstitions were at one time, and in some cases still are, taken seriously.
A few years ago, I was on a trip with a couple of coworkers who are Navajo. We were driving through some rainy weather, and when I noticed a full rainbow, I pointed it out to my companions. I was immediately chastised for pointing at the rainbow. They could not tell me why I shouldn’t point at a rainbow, only that it’s bad luck. And for that matter, I was told, we’re not supposed to allow dogs inside when it’s raining. I’ll ignore that one.
Some superstitions likely have some basis in fact but become an irrational association. An old superstition says that a dog howling when someone is sick is a bad omen. I’m guessing that dogs, being pretty perceptive creatures, sense when someone is dying and might howl. Another one, bad things come in threes, is easy to explain when “bad things” is rather subjective. And another old one, biting your tongue when you’ve recently told a lie, is obviously based on the fact that we’re all liars, so anytime you bite your tongue, you’ve probably recently lied.
Of course, you are likely familiar with a number of common superstitions, such as knocking on wood and the lucky rabbit’s foot. I have to say, when I bought a rabbit’s foot as a kid, I was horrified to discover that it was a real rabbit’s foot! You may also toss spilled salt over your left shoulder and avoid walking under ladders (well, that’s just common sense, anyway). But are these common superstitions really harmless? I knock on wood sometimes, but more as a joke than putting real stock into the act. If your participation in superstitions is based in irrational fear, I would say the superstition is not harmless.
I have my share of irrational fears, but I recognize them as such. When I was a kid, I avoided stepping on cracks. I knew I would not break my mother’s back, but I just didn’t want to take any chances, ya know? Of course, my mother eventually did break her back, but that was long after I got over the stepping on cracks thing, and I knew I was not responsible.
I do still have two completely irrational fears that I will share with you. I recognize them as irrational, but they are not debilitating, so I allow them in my life for now. The first is looking at a mirror in the dark. Blame that one on playing Bloody Mary as a kid. I justify the continued avoidance as lack of need to see myself in the dark. The other irrational fear is of earwigs. No, I don’t believe they will crawl in my ear. I lived through an infestation of them about 30 years ago, and to this day, I shake out my bath towel to make sure there are none in there before drying myself, even in the dead of winter. I’m sure if I educate myself about earwigs, I will probably reduce my revulsion, but I have more important things to attend to.
I also have two rational fears I will share with you. One is rattlesnakes. Some people have an irrational fear of snakes. My fear is rational. That is, I have researched rattlesnake behavior, and I have a rational, i.e. knowledge-based, fear that being located in rattlesnake territory and having encountered rattlesnakes, my dogs or I could realistically get bit.
My other rational fear is contracting plague. Yes, bubonic plague. But again, the fear is based in reality that where I am located, I am potentially exposed. That being said, I know what I can do to mitigate the threat, I am familiar with the symptoms, and I know that early treatment is effective. Or I could rely on the old superstitious method of avoiding plague: wear around my neck a spider inside of a walnut shell. What do you think – good idea?
Click here to receive the Apocalypse Observer Newsletter in your inbox
www.readmota.com
To comment, scroll down and type in your comment. Under Comment As, you can select Anonymous or Name/URL (you don’t need to enter a URL). Then hit Publish.

1 thought on “Superstitions: The Fourteenth Floor”