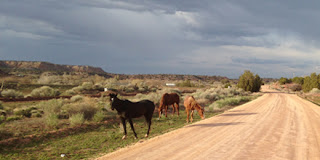 The beast champs on the bit as it becomes excited. It inspects you with one eye. You catch the earthy odor of equine as you place a foot in the stirrup, gripping the reins and taking hold of the saddle horn with your left hand.
Almost invariably the horse moves away as you swing up, the saddle tilting under your weight.
You grip the horse between your knees, and it lurches forward, prancing.
You use the reins, drawing back to put some pressure on the bit, letting the horse know it has a job. A rider that is now claiming the right to choose what happens.
As you loosen the reins, the animal wants to move. It wants to run. It wants to expend some energy.
But you want the horse to warm up before turning it loose. You maintain control, starting out at a walk. You watch the horse’s ears, the signaling devices that will tell you what the horse is thinking even before it knows itself.
You can feel muscles working through the thickest saddle leather.
The horse’s head bobs up and down, trying to find release in the tight bit. It wants to run.
Depending on the terrain, the animal may plod, or stumble, or reach to snatch a chunk of grass that invites. A good rider resists allowing a horse to eat. You use your heels to encourage the horse past the temptation.
The surges and sudden movements beneath you become part of you. You become part of the horse.
The animal calms as it begins to understand that you won’t put up with being second fiddle. It begins to warm up and is soon working.
You are always aware of the horse’s ears. They will warn you. This large animal is geared by evolution to fear, and to run.
A smooth pasture or an open space of soft earth invites more speed. You tighten your knees, and the horse responds. The creature is one of wind and air, and it breaks into a fast lope, still under control. The rocking motion eats up the ground.
Another horse passes you, and your pony fights the bit. It wants to run. Muscles strain and surge and bunch, the rhythm of the lope intensifies.
It’s time, and you loosen the rein. The horse knows what that means, and it stretches out into a full gallop. The wind buffets you. The speed is exhilarating. Small obstacles present themselves, and the horse gathers itself to move to avoid them or jump over them. The huge feet drum the earth, and you can see the front legs flashing ahead of you as they reach for more speed.
You catch and pass the slower horse that passed you earlier. Your pony barely notices.
Bad ground ahead, but the pony still wants to run. You have to haul back on the reins, gripping with your knees to keep from being pitched from the saddle. The horse arches its neck as it slides on its rear hooves. Dust billows up.
The horse is excited. It loves to run. It spins in a pirouette, sides heaving.
The other horses gather about, and riders laugh and talk as they control their ponies. The sun beats down… and it’s a good day.
Click here to receive the Apocalypse Observer Newsletter in your inbox
www.readmota.com
To comment, scroll down and type in your comment. Under Comment As, you can select Anonymous or Name/URL (you don’t need to enter a URL). Then hit Publish.