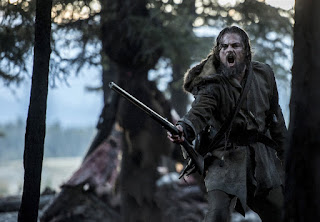 I thought The Revenant was one of the most accurately filmed and choreographed movies ever. The first scene where they were hunting an elk, on flooded ground in the forest, was brilliant. Also nice to see a film with real, time period type horses instead of Andelusians or quarter horses. The brutality was something most films pass over, too, and in this case it added to the tale. I’ve been a fan of the Hugh Glass story since I was a little kid, and although the movie took some artistic license, it did his memory proud.
I have to wonder why they used such poor special effects in the bear attack scene. The artwork was clumsy at best, and distracting otherwise. Certainly not in keeping with the quality of the movie as a whole.
There were a couple of scenes that were added to make the point that white/Indian relations were not good. Some of that made good movie making, and the point was driven home… but some was unnecessary and became over done.
The original tale is brutal, and the film began with that true to life, and shocking for Hollywood, realism. But in the end the story was manicured and lost something in the process.
I believe the film is an important contribution to movie making, but it will disturb some people and I predict will not sell particularly well on DVD. If you like realistic, gritty and sometimes unpleasant reality, then this movie offers a pretty accurate look in short doses piled up on top of each other.
Stars? 5 despite the technical issues with the bear and the changes in the story line for the worse. I should say 5 stars in the first viewing, because I’m not sure I will go out of my way to see it again.
Click here to receive the Apocalypse Observer Newsletter in your inbox
www.readmota.com
To comment, scroll down and type in your comment. Under Comment As, you can select Anonymous or Name/URL (you don’t need to enter a URL). Then hit Publish.