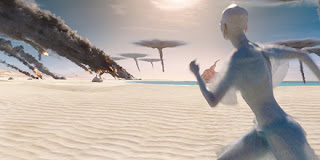 I try to do positive movie reviews. I just don’t find it worth my time or emotional expense to put effort into bad movies.
But I’ll make an exception this time.
Maybe my negativity about the movie Valerian is because it is a terrible film, but even more, it is a waste of exceptional effort and tremendous talent.
To be specific, this is what you get when you splice really good cinematic ability, special effects, costume and set design, with a mediocre script and an overwhelmed director.
The tragedy of this film is not in the story because the tale was too weakly presented to make the point of any calamity that could have made the picture worth watching. And the two young actors burdened with carrying the storyline were also burdened with a script they couldn’t sell.
I blame the director.
This is what happens when the person running the show can’t decide whether to be serious, or silly. I am not a fan of gratuitous humor. This movie was ruined by unfunny and unnecessary dialogue, delivered in a way that was painful to experience. I was left wondering if the acting was as bad as it appeared or if the actors were just badly directed.
To give the movie some positive feedback, I have to say that even though the alien characters critical to the story reminded me of Avatar‘s Na’vi, they worked. They were well done artistically, enough so that the similarity was easy to forgive. Special effects, mostly alien creatures, seemed more sophisticated in their design and presentation than in many films.
We go to movies like this with an expectation of having to suspend our *sense of disbelief*. That ability, to place our concept of reality on hold, is critical to enjoying science fiction or fantasy. But this film beats us over the head with improbability, and when we might have risen to try again, it delivers unbelievably cliché dialogue that grips us in a syrupy stickiness.
Want a good movie to rent? Stay away from this painful attempt.
Click here to receive the Apocalypse Observer Newsletter in your inbox
www.readmota.com
To comment, scroll down and type in your comment. Under Comment As, you can select Anonymous or Name/URL (you don’t need to enter a URL). Then hit Publish.