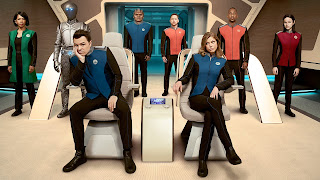 It may be the year 2418, but the human condition hasn’t changed much. People still deal with personal problems like infidelity and with work problems like not being able to wear shorts to work. If Seth MacFarlane’s new Sunday night Fox series, The Orville, is going to be successful, it’s for this very reason.
You may be familiar with some of MacFarlane’s other work, such as Family Guy and Ted. Whether you’re a fan of his or not, rest assured that The Orville is unlike any of his other work. Not better or worse… just different. His other work is all about the comedy, mostly juvenile, often intentionally offensive, always a parody of someone or something, and nothing is safe or sacred. You will not see this in The Orville.
The Orville is clearly a labor of love for MacFarlane. I get the feeling that MacFarlane is quite the nerd, and while The Orville may on the surface look like a parody of Star Trek, to look deeper is to see more of an homage, speckled with bits of MacFarlane style humor, not quite as juvenile as one might expect and with better timing than we see in MacFarlane’s other work. The ship’s name, Orville, is itself a joke, named for Orville Wright, I assume, a sophistication that MacFarlane fans may not be accustomed to.
Episode one finds the main character, Ed Mercer, played by MacFarlane himself, newly appointed the captain of the Orville, an exploratory spaceship. Sounds impressive, no? Well, as it’s one of 3000 ships in the fleet, and given the lack of enthusiasm shown by Mercer’s superior, the position seems on par with being the store manager of a Gap. Nevertheless, Mercer is honored and excited until learning his first officer is his ex-wife. And the humor ensues…
As I mentioned, if this show succeeds, it will be on the merit of its character development, and so far, I find the characters interesting and relatable, from Mercer himself, to the “racist” (anti-flesh) mechanical alien that serves as science officer, and all others in between. Mercer even seeks relationship advice from the enemy alien captain. This show has heart.
The show also has really cool makeup and special effects. If you are a sci-fi fan as I am, the visuals play an important role. MacFarlane spared no expense in the visual effects department, and viewers will find a plethora of interesting and unique aliens, finely-designed buildings and ships, and a realism as fine as what you’ll see in any other series. Add to this MacFarlane’s skill at comedic element of surprise, and details are not always what they seem… a plant/fish that’s actually a scientist, an odd choice of airplane seatbelts in the space shuttle that plays a crucial role.

Not everything is perfect in The Orville. One glaring plot hole plagues my mind. Why in the ‘verse would the enemy alien Krill, already apparently in the vicinity of the science lab with the device they seek to steal, WAIT for the Orville to arrive to attempt the theft? It’s like a bank robber waiting for the police to arrive before entering the bank. But even this I can forgive because this first episode was fun and enjoyable to watch. As long as The Orville’s writing team can pull it together for the rest of the series, I think we have a winner.

Let us know what YOU think in the comments…
Click here to receive the Apocalypse Observer Newsletter in your inbox
www.readmota.com
To comment, scroll down and type in your comment. Under Comment As, you can select Anonymous or Name/URL (you don’t need to enter a URL). Then hit Publish.