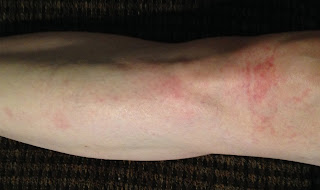 I would really like to chop off my leg at the knee right now. Don’t worry. I’m not going to. I’ll tell you why in a minute…
Today I volunteered along with a dozen or so colleagues to pick up litter along a stretch of highway near my workplace. If you’ve read this recent post of mine about cleaning up garbage, you know how I feel about it. I’m not going to talk about that here. I’m going to focus on safety.
From my experience picking up trash at our nearby lake, I knew that doing so poses some risks. You can get cut by sharp objects, bites and stings can surprise you, and certain items can harbor dangerous bacteria. I’m here to tell you that until you pick up highway litter, you ain’t seen nuthin.
We began the day with some orientation from the state transportation department. We had already been told to wear long pants, long sleeves, hat, sunscreen, etc. Gloves were provided and safety vests required. I already knew that safety concerns include weather, wildlife, desert plants (we’re in Arizona), and sometimes the trash itself. But I was in for some surprises.
We were warned not to pick up any flashlights and absolutely not to attempt to turn on any flashlights. Why? Because they can explode. Seriously, three flashlights found in the Phoenix area exploded when people tried to see if they were functional. Is someone making flashlight bombs?
Then we were informed that people who make meth have a habit of disposing their toxic waste out the car window so as not to get caught with it. Don’t pick up anything you don’t know what it is.
Don’t pick up broken glass, pee bottles, anything sharp, syringes, car batteries, anything you suspect to be hazardous.
Don’t go within six feet of the pavement. No roughhousing. Don’t distract drivers.
I was starting to wonder what I was really in for. Surely there are no meth labs in our little town….
Finally, our teams headed out to our designated sections, and I enthusiastically began filling my first bag with aluminum cans, paper cups, glass bottles, Styrofoam plates… the usual stuff.
We worked our way along the roadside, and after a ways I looked down at a small scattering of… something. What is that? I bent over, examining the small find, and realized I was looking at several razor blades. Sharp. Don’t pick up sharp items. I alerted one of the guys following behind me and moved on, leaving the danger behind for the “professionals” to find later.
A little further along, several of us grouped together in a section particularly heavy with garbage. It was weedy, and I felt a little sharp prick on the back of my leg. I moved away from the weeds and started to rub my leg. Another prick. And another.
I started jumping up and down and yelled out as my team looked at me with puzzled expressions, words I never thought I’d say, “I have ants in my pants!”
“Really?” asked one of the guys, and then all of a sudden, all of us were jumping up and down, stomping, slapping, shirts off (not mine), and getting the bleep out of there as we were all attacked. We skipped that section and moved on.
After that I found several more items I chose not to pick up, as well as some strange things, including a complete outfit (shirt, pants, socks, gloves, and not one, but two pair of tighty whities), a pile of 27 mini liquor bottles (that I hope were drunk by at least a dozen people), several plastic clothes hangers, and other things you just don’t expect to find along a highway.
Finally, the end in sight, we converged with the other teams. Just a few more yards to go. Just a few more bits of garbage to bag.
Another prick. Ouch! More ants. Stomp, stomp. Keep walking… only this time my leg started burning. Fire ant.
The burn got worse very quickly, and I got a ride home. I have spent the entire rest of the day in pain that is exacerbated by activity. So my husband is in charge of dinner, and I’m watching Live from Comic Con on Syfy while I wrap up this blog post with my leg immobilized and under ice. I’ll be asleep pretty soon now that I’ve taken a Benadryl…. {yawn}
Click here to receive the Apocalypse Observer Newsletter in your inbox
www.readmota.com
To comment, scroll down and type in your comment. Under Comment As, you can select Anonymous or Name/URL (you don’t need to enter a URL). Then hit Publish.

1 thought on “Ouch, Today I Adopted a Highway”